Memfault’s AOSP SDK “Bort” received a major update 4.0 with many improvements such as additional support for Android 12 and multi-user compatibility.

We added support for Custom Metrics so that devices can report product-specific numerical values, strings, and state transitions on regular intervals. Together with a growing set of built-in Metrics, this leads to a powerful combination of per-device debugging (e.g. correlation of CPU activity and battery voltage) and fleet-wide insights (e.g. “how many devices exceed 80% of their storage” or “What is the average battery discharge rate?”). The reported values contribute to the recently introduced Time-Series Metrics and Device Attributes. 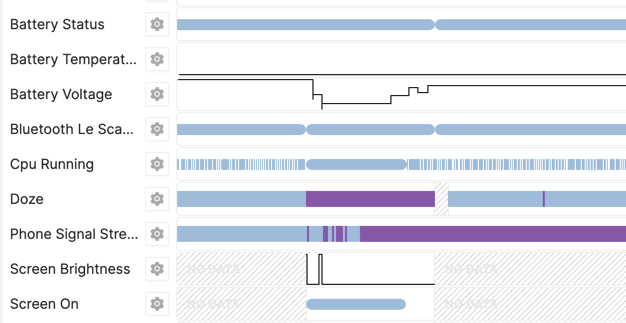 Another rather advanced feature enables devices without direct Internet connection to report crashes and metrics to Memfault. Data is packaged as .mar (Memfault Archive) files and vendors may upload them at a later time or upon request (e.g. downloaded periodically via USB or in a local network by an auxiliary device). This allows vendors to use Memfault in scenarios with strict security requirements.

Memfault’s Dashboard provides an overview of your fleet at a glance. We have updated the charts “Active Devices” (more sources used as signal) and “Software Versions” (only active devices considered) to better compare apples to apples.

The visible time range for “Software Versions” can now be changed from “2 months” all the way down to just “24 hours”. Since the same chart is now being used on the Cohort details page, it not only allows you to see long-term trends, but also acts as timely signal to observe the effect of an ongoing OTA software rollout.

The charts “Seen Devices” and “Received Events” have been removed.

We have published the Bort AOSP SDK 4.0 which includes: