The following guide will walk you through step-by-step how to integrate and test the Memfault SDK for a Cortex-M device using the GNU GCC, Clang, IAR, ARM MDK, or TI ARM Compiler.

Upon completion of the integration, the following subcomponents will be added to your system! 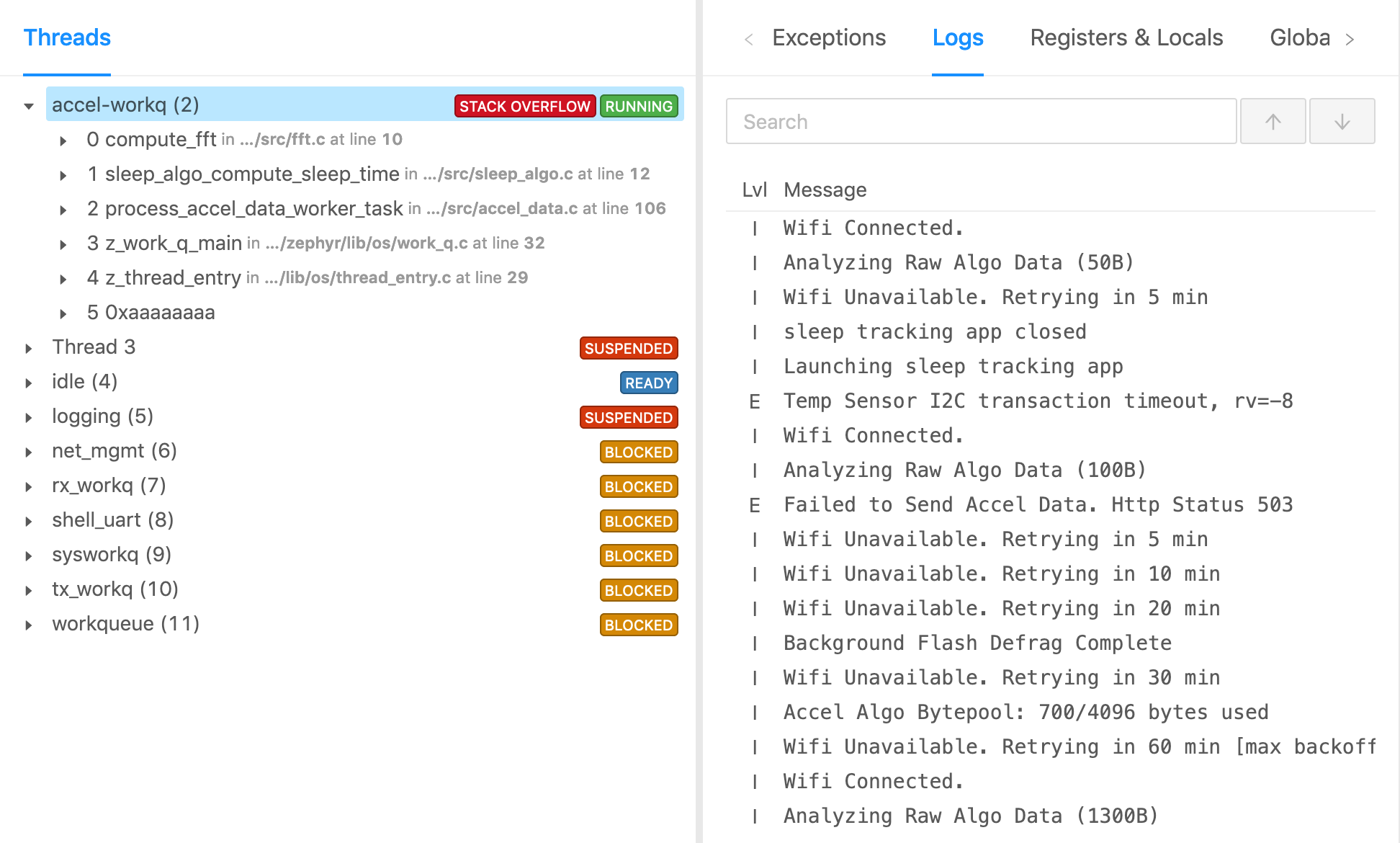 If you do not use GDB, skip ahead to the next step.

If you use GDB, a full coredump can be captured by just using the debugger! This can be useful during development to take advanatge of Memfault's analyzers when a device crashes or hangs.

To perform the capture, navigate to http://app.memfault.com/ and select the "Issues" page in the Memfault UI, click on the "Manual Upload" button, and click on "walk-through on how to upload your first core dump". From there you can follow the guided steps to perform a capture. At the end you will see an analysis of your system state.

The memfault-firmware-sdk is a self-contained C SDK you will need to include into your project.

Create a folder to hold memfault-firmware-sdk as well as the configuration and porting files to your platform.

When you are done, you should have the following directory structure in your project:

Based on the build system you are using, expand the appropriate tab below and follow the steps to add the sources to your target

Open the memfault_platform_port.c copied into your third_party/memfault folder and fill out the stub implementations accordingly.

From your main routine, add a call to memfault_platform_boot() prior to the startup of an RTOS or baremetal while loop.

Memfault has a module for tracking and reporting what resets are taking place on your platform.

The Memfault SDK will (sparingly) emit diagnostic logs to alert of integration configuration problems. The logging subsystem can also easily serve as logging infrastructure for your own platform if you do not yet have one set up.

Based on your setup, choose one of the options below:

The Memfault SDK includes pre-canned integrations for many RTOS environments. Expand the tab for the one applies to your system below in order to pick them up.

Memfault can automatically capture crash information on asserts by calling MEMFAULT_ASSERT() from your platforms assert handler:

When the system faults or asserts crash information can be recorded and sent to Memfault after the device reboots. In order for this information to be saved, it must be persisted to a storage area that persists across a device reset.

Coredumps can be saved in a .noinit region of SRAM, internal flash, external flash, or even streamed out over a peripheral to another MCU when a coredump takes place.

Available options can be found below:

Add a Unique Identifier to target#

Memfault has facilities for capturing a unique identifier automatically as part of the build process. This information is used by Memfault's cloud infrastructure to ensure the symbol file uploaded matches the data reported in a coredump.

A longer discussion about firmware versioning best practices and build identifiers can be found here.

Memfault has two ways to add a Build ID to a target. Select the appropriate one below based on your toolchain setup.

At this point your project should compile and be able to boot. On startup you should see some messaging like:

At this point your project should compile and be able to boot. On startup you should see some messaging like the following print when memfault_platform_boot() is called:

With Memfault compiling into your build, it's now time to add some initial instrumentation, and test the integration!

Trace events are used for generating alerts in the Memfault UI when unexpected events are encountered. Let's start by creating a generic type for critical errors that have been detected.

Heartbeat metrics allow you to easily monitor your platform and confirm it is operating as expected.

The Memfault SDK functionality can be easily exercised via CLI test commands.

If your platform does not have a CLI, these commands can also be wired up to a button press or called from main() on bootup from a test image

Prior to having an end-to-end transport in place, Memfault data can be exported over any serial connection or via GDB directly.

All data collected by Memfault can be exported as opaque packets called "chunks". To trigger an export, call the test_export command added to your device CLI.

If data has been collected, you will see strings with the format: MC:BASE64_ENCODED_CHUNK: in the dump.

It's perfectly fine for other logs to be interleaved with the exported data.

Copy the logs from the console, navigate to the "Chunks Debug" view for your project, and paste the logs:

Select "Next" to review the chunks that were identified and (optionally) update the "Device Serial" being used to report data: 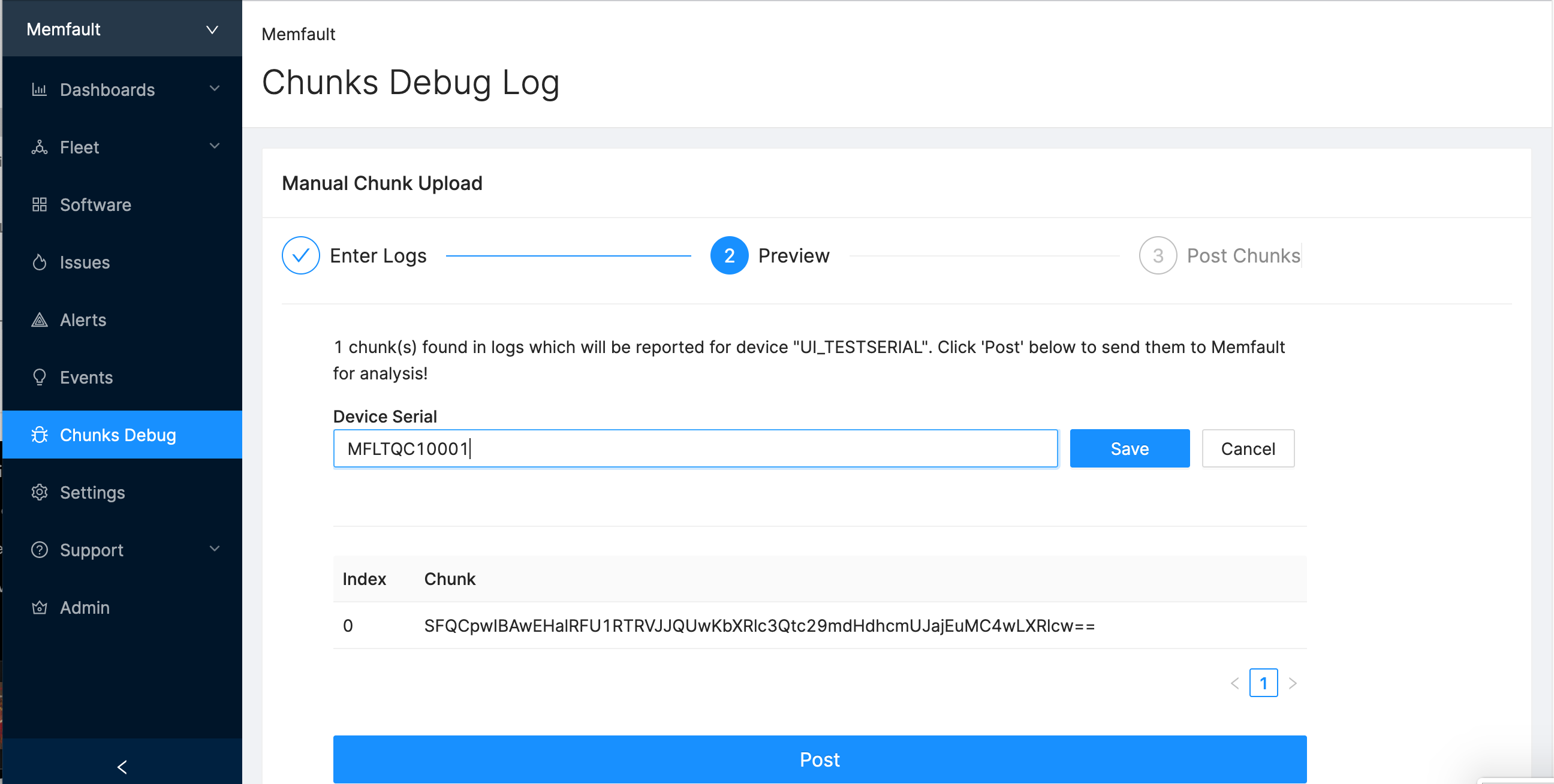 Select "Post" to submit the chunks to Memfault. The chunks will appear in the view directly below. Check and make sure there are no "Errors" to address.

Posting chunks from a local setup can be automated using our CLI tool or GDB script.

This strategy can also be used even when an end-to-end transport is in place for local QA testing or in CI/CD test automation setups.

At this point you should be able to generate a test events and crashes and push the data to the Memfault UI.

You can confirm the error traces and crashes have arrived succesfully by navigating to the "Issues" page. Follow the link pointed to below and upload a symbol file.

After this step you will see the trace in the list of issues!

You can programatically upload symbol files with the Memfault CLI tool.

If you encounter any issues in your data transfer implementation, Memfault has tools to help debug!

With data collection verified locally, the final step is to push data automatically to the Memfault cloud for analysis.

The Memfault SDK exposes an API that packetizes Memfault data into "chunks". These "chunks" need to be forwarded to the Memfault Cloud (either directly via HTTPs or indirectly via a gateway device such as a computer or mobile application)

If you cannot post data directly using HTTP, no problem at all. In fact, that is one of the most common configurations. In these setups, data can be proxied from the MCU to a device which can perform a HTTP request over transports such as UART, BLE, COAP, LoRa, Zigbee, etc). The size of a "chunk" is fully configurable by you can be tuned to best match your transport requirements. All message re-assembly is dealt with by Memfault in the cloud.